Undiscovered Moons May Lurk in Our Own Solar System

A+ A-
Print Email
In the 1970s and 1980s, NASA sent twin spacecraft — Voyager 1 and Voyager 2 — on a quest to explore the solar system. Both probes zoomed by Jupiter and Saturn, and Voyager 2 continued on to see Uranus and Neptune.
The spacecraft made many discoveries, including finding several moons at each system. But long after Voyager 2 left Uranus behind in 1989, and with fewer spacecraft exploring the outer solar system, we are still finding new satellites. Some, surprisingly, are from old Voyager data being reanalyzed with new techniques. 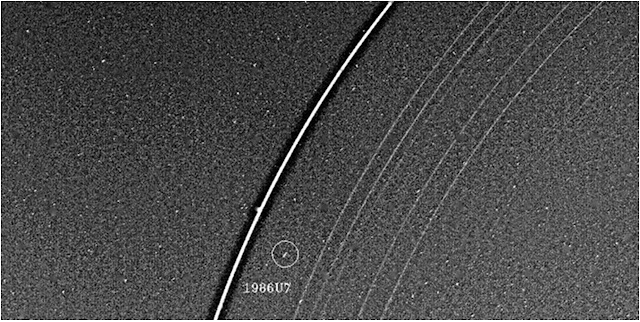 Other finds are from the venerable Hubble Space Telescope, which has been in Earth orbit since April 1990. It shows that even decades after Voyager, there are likely new moons waiting to be found -- especially with the sharper eye of the James Webb Space Telescope slated to start working in 2018.
Part of the secret appears to be the Cassini factor. Scientists have been learning a lot about ring behavior, and how satellites affect them, since the mission has been examining Saturn in 2004. Recently, scientists applied that understanding to the Uranus system, using data from Voyager obtained in 1986. They found regular patterns in the rings that suggest there could be moonlets there.
"There were some very clear periodic variations in the structure of the alpha and the beta rings," said University of Idaho physics researcher Matthew Hedman, who was a participant in the experiment led by doctoral student Rob Chancia, in an interview with Seeker. "The opacity of the ring just changed in a periodic way over a couple of kilometers. The thing that was weird about the structure was it had different wavelengths in different places. It wasn't the same kind all the way around the ring, which a lot of ring structures are." 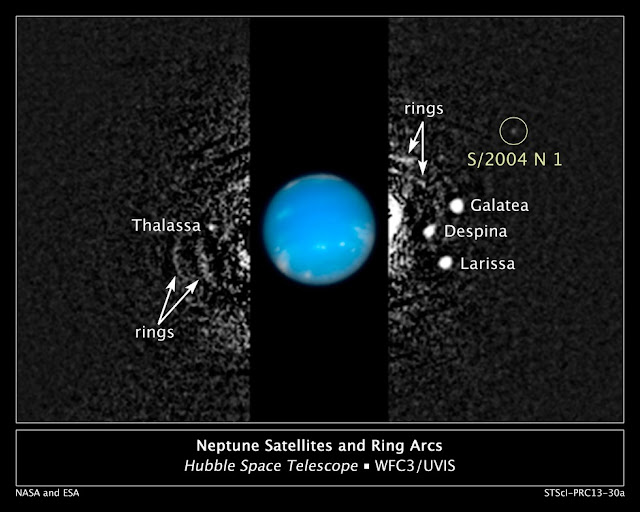 A composite Hubble Space Telescope image showing Neptune (color) and a new moon (black and white).Credit: NASA, ESA, M. Showalter/SETI Institute
The closest analog he could think of is something called a "moonlet rake." While the term sounds straight out of a James Bond movie, in reality it describes how a moon preturbs material on the other side of a ring gap. It was first described for the Encke gap, a famous gap in Saturn's outer rings. But here's where the story stops, at least for now. Hedman and his graduate students will publish the results shortly in the Astronomical Journal in the hopes that somebody more experienced in spacecraft imaging can find moonlets. Hedman will continue investigating and comparing ring structures across the solar system, as not everything yet can be explained by moons.
One researcher who may carry the torch is a veteran moon-hunter himself. The SETI Institute's Mark Showalter was the one who first described moonlet rakes. He's been processing spacecraft images since Voyager; he was a grad student when the spacecraft passed by Saturn, and was doing his postdoctoral work during the Uranus and Neptune encounters.
Thirty years of moon-hunting came in very handy for him in 2013, when his team announced they had discovered yet another moon around Neptune, using Hubble. So how could Voyager go right past the moon and not easily find it? The camera was built on 1970s technology, and it was working in low light, Showalter said. He also found the Uranian moons Cupid and Mab (using Hubble) in 2003; one was practically invisible in Voyager data when he looked again, while the other one was barely detectable.
One of his next projects will be looking again at Uranus to see if those moonlets are there, he said. "I do have a lot of Hubble data of the Uranus system," he said in an interview. "Now that I know where to look, based on Rob and Matt's results, I do plan to do a search of the existing archive of Hubble data from Uranus for any chance to pick out these little objects." 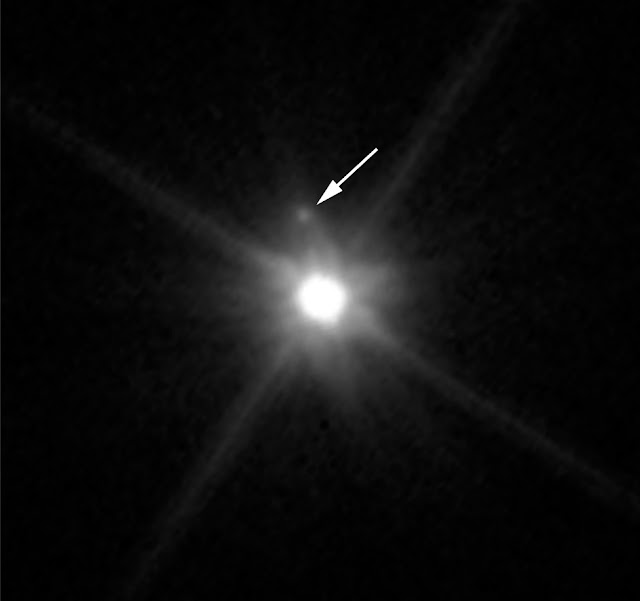 A moon is spotted around the dwarf planet Makemake in this Hubble Space Telescope Image from April 2015.Credit: NASA, ESA, and A. Parker and M. Buie (SwRI)
While the thrill of discovery is what excites the public, there are more fundamental things these new moons can teach us. At Neptune, Showalter was fascinated that his tiny moon discovery in 2013 did not follow the pattern of smallest to largest moons (from the center of Neptune outward) previously discovered in the system. He noted that Neptune's system was completely changed by the capture of Triton (a very large moon) early in the solar system's history, but it's hard to know all the dynamics with the information we have so far.
Other moon mysteries lie in other parts of the solar system. When New Horizons was on its way to Pluto, the moons Styx and Kerberos were found in 2011 and 2012, respectively. Nix was also found in 2005, the year before it launched. (All three finds included researchers part of the "Pluto Companion Search Team", who were tasked specifically for New Horizons' flight.) Previously, only the moon Charon was known — discovered in 1978.
"The Pluto team is intrigued that such a small [dwarf] planet can have such a complex collection of satellites," NASA said in a 2012 statement. "The new discovery provides additional clues for unraveling how the Pluto system formed and evolved. The favored theory is that all the moons are relics of a collision between Pluto and another large Kuiper belt object billions of years ago."
And earlier this year, a moon was found around the dwarf planet Makemake — reinforcing the idea that all dwarf planets have satellites, the team said at the time. The same techniques were used to find Makemake's moon as for the Pluto satellites discovered in 2005, 2011 and 2012. Other searches of Makemake had revealed nothing.
"Our preliminary estimates show that the moon's orbit seems to be edge-on, and that means that often when you look at the system you are going to miss the moon because it gets lost in the bright glare of Makemake," said lead imager Alex Parker, of the Southwest Research Institute in Colorado, in a statement at the time. (Parker did not respond to requests for an interview before this article's deadline.)
Posted by samsalleh
Labels: Astronomy, Hubble, Makemake, Moons