A+ A-
Print Email
An international team of astronomers has taken the sharpest view of Eta Carinae, an unusual binary star system 7,500 light-years from Earth that is known for sensational stellar winds that move at velocities of up to 10 million kilometers (6 million miles) per hour.
The winds extend far from the stars, in what is known as the Homunculus Nebula, 1 light-year long and estimated to contain 40 Suns' worth of gas and dust. The researchers were interested in an area at the nebula's core, 1,000 times smaller than its length, where the winds from the two stars mix. 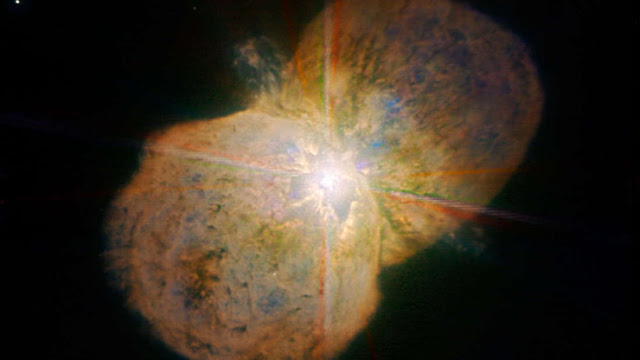 There, the winds smash into each other, creating temperatures of millions of degrees and emitting a large amount of X-ray radiation. Using the Very Large Telescope Interferometer(VLTI) in Chile, the team, led by Gerd Weigelt from the Max Planck Institute for Radio Astronomy in Germany, was capable of seeing this violent region for the first time.
“Our dreams came true, because we can now get extremely sharp images in the infrared. The VLTI provides us with a unique opportunity to improve our physical understanding of Eta Carinae and many other key objects,” said Weigelt in a statement.
In a paper, which will appear in the journal Astronomy & Astrophysics, the researchers discussed the unexpected details of the structure. The region is fan-shaped due to the winds from the smaller, hotter star crashing into the denser winds from the larger one. These observations allowed for precise measurements of the wind speeds in the region, which will be used to improve the computer models and hopefully explain exactly what goes on in and around these stars.

This mosaic shows the Carina Nebula (left), Eta Carinae (middle), and the region where the winds combine (right). ESO
The researchers are already looking at the next set of observations that will be taken when the VLTI is upgraded.

“The new VLTI instruments GRAVITY and MATISSE will allow us to get interferometric images with even higher precision and over a wider wavelength range,” added team member Dieter Schertl, also at the Max Planck Institute for Radio Astronomy. “This wide wavelength range is needed to derive the physical properties of many astronomical objects.”

Eta Carinae is known to have undergone a formidable brightening during the 1800s, becoming the second-brightest star in the sky. The event is known as the Great Eruption, and it was caused by the star expelling a large amount of material in a very short amount of time.
Posted by samsalleh
Labels: Astronomy, Binary Stars, Eta Carinae