A+ A-
Print Email
Be sure to be outdoors before dawn on the universal date of October 21 to enjoy one of the year’s most reliable meteor showers. Hey its a nice sight, it suits the whole family and best of all its FREE!
The offspring of Comet Halley will grace the early morning hours as they return once again as the Orionid meteor shower. This dependable shower produces an average of 10-20 meteors per hour at maximum and the best activity begins before local midnight on the 20th, and reaches its best as Orion stands high to the south at about two hours before local dawn on the 21st. With the Moon nearly out of the morning picture, this is gonna’ be great! 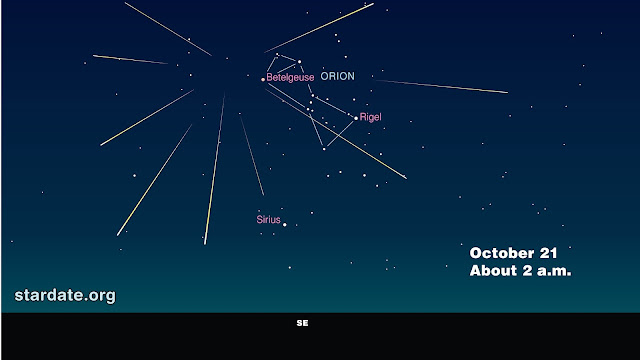 Although Comet Halley has long since departed our Solar System, the debris left from its trail still remain scattered in Earth’s orbital path around the Sun, allowing us to predict when this meteor shower will occur. We first enter the “stream” at the beginning of October and do not leave it until the beginning of November, making your chances of “catching a falling star” even greater! These meteors are very fast, and although they are faint, it is still possible to see an occasional fireball that leaves a persistent trail.
Ok, its staged but… these sort of scenes really do happen
For best success, try to get away from city lights. Facing overhead, simply relax and enjoy the stars of the winter Milky Way. The radiant, or apparent point of origin, for this shower will be near the red giant Alpha Orionis (Betelguese), but meteors may occur from any point in the sky.
You will make your meteor watching experience much more comfortable if you take along a lawn chair, a blanket and a thermos of your favorite beverage.
Clouded out? Don’t despair. You don’t always need your eyes or perfect weather to meteor watch. By tuning an FM radio to the lowest frequency possible that does not receive a clear signal, you can practice radio meteor listening! An outdoor FM antenna pointed at the zenith and connected to your receiver will increase your chances, but it’s not necessary.
Simply turn up the static and listen. Those hums, whistles, beeps, bongs, and occasional snatches of signals are our own radio signals being reflected off the meteor’s ion trail! Pretty cool, huh? Illustration Courtesy of Star Date Magazine. Written by Tammy Plotner and submitted to “Dave Reneke’s World of Space and Astronomy News”.

People love’em… kids thrill to see ’em, and they just never cease to amaze. They’re meteor showers and it’s happening right now so head out in the backyard, set up and let’s take a look.
Most important: a dark sky. Here’s the first thing – the main thing – you need to know to become as proficient as the experts at watching meteors. That is, to watch meteors, you need a dark sky. It’s possible to glimpse meteors from the suburbs. But, to see the most meteors possible, avoid city lights.
Know your dates and times. You also need to be looking on the right date, at the right time of night. Meteor showers occur over a range of dates, because they stem from Earth’s own movement through space. As we orbit the sun, we cross “meteor streams.” These streams of icy particles in space come from comets moving in orbit around the sun. Comets are fragile icy bodies that litter their orbits with debris. When this cometary debris enters our atmosphere, it vaporizes due to friction with the air. If moonlight or city lights don’t obscure the view, we on Earth see the falling, vaporizing particles as meteors. The Lyrids take place between about April 16 and 25. The peak morning in 2013 should be April 22, but you might catch Lyrid meteors on the nights around that date as well.
Where to go and what to bring. You can comfortably watch meteors from many places, assuming you have a dark sky: a rural back yard or deck, the hood of your car, the side of a road. State parks and national parks are good bets, but be sure they have a wide open viewing area, like a field; you don’t want to be stuck in the midst of a forest on meteor night. If you want to bring along equipment to make yourself more comfortable, consider a blanket or reclining lawn chair, a thermos with a hot drink, binoculars for gazing at the stars. Be sure to dress warmly enough, even in spring or summer, especially in the hours before dawn.
Are the predictions reliable? Although astronomers have tried to publish exact predictions in recent years, meteor showers remain notoriously unpredictable. Your best bet is to go outside at the times we suggest, and plan to spend at least an hour, if not a whole night, reclining comfortably while looking up at the sky.
Posted by samsalleh
Labels: Astronomy, Orionid Meteor Shower