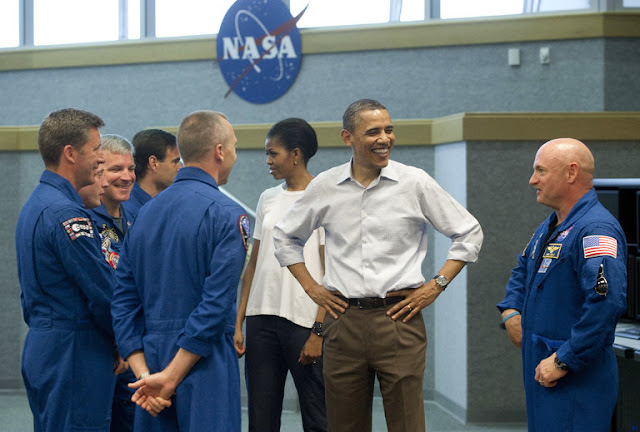 In an essay published Tuesday on CNN’s website, President Obama renewed his call for American astronauts to visit Mars.
“We have set a clear goal vital to the next chapter of America’s story in space: sending humans to Mars by the 2030s and returning them safely to Earth, with the ultimate ambition to one day remain there for an extended time,” he wrote.
The plan is not new: The president laid out the same goal in 2010 during a speech at NASA’s Kennedy Space Center in Florida. But the column on Tuesday, along with a joint blog post by senior White House and NASA officials, offered new details on how the United States expected to reach the red planet.
In August, NASA awarded contracts to six companies to develop habitats that could eventually sustain astronauts on deep-space missions like Mars. On Tuesday, John P. Holdren, the White House science adviser, and Charles F. Bolden Jr., the NASA administrator, announced that NASA would also allow private companies to hitch their own modules to the International Space Station.
In the next decade, the officials added, work aboard the space station will move into a stage in which new technologies will be tested in the stretch of space between Earth and the moon. Still, plenty of challenges remain. Here are some answers to the most pressing questions.

Is travel to Mars even possible?

Yes. For decades, a human mission to Mars has been regarded as difficult but doable, given enough time and money and a willingness to subject astronauts to risks like radiation during the long journey.

Then why aren’t we there already?

In his article, President Obama quoted John Noble Wilford, the New York Times reporter who covered the Apollo moon landings in the 1960s and ’70s. Mars tugs at the imagination “with a force mightier than gravity,” Mr. Wilford wrote.
Wernher von Braun, the mastermind of Apollo, sketched out plans for reaching Mars, too. Back then, many people thought the journey would move from the moon to Mars in a decade or two. But President Richard M. Nixon pared back NASA’s grand ambitions, leaving just the space shuttle. Astronauts have not ventured beyond low-Earth orbit since 1972, when the crew of Apollo 17 returned home after a 12-day trip to the moon.
In 1989, on the 20th anniversary of the Apollo 11 moon landing, President George Bush announced an initiative to send astronauts back to the moon and then onward to Mars. When NASA came back with a plan that was rumored to cost half a trillion dollars over two to three decades, the initiative faded.
The main challenge is not technical; it is political and financial. If Congress was to provide steady funding for the next 20 years, NASA could probably finish the task. But changes in presidential administrations have generally led to re-examination and changes in NASA’s marching orders.
Unlike the flush years at the height of the Apollo program, peaking at 4.4 percent of the federal budget in 1966, NASA’s budget today is steady and comparatively small: The $19.3 billion for the space agency this year amounts to about 0.5 percent of federal spending.

Won’t SpaceX get there sooner?

At the International Astronautical Congress last month in Guadalajara, Mexico, Elon Musk, the chief executive of SpaceX, announced his architecture for a giant rocket and spaceship — what he called the Interplanetary Transport System — that would take colonists to Mars, 100 at a time. The trips could begin as soon as 2024, he said.
Mr. Musk was confident, but that was a highly optimistic timeline. His smaller, workhorse rocket, the Falcon 9, has had two catastrophic failures in the past two years. A larger rocket under development, the Falcon Heavy, is years behind schedule.
SpaceX still has to prove new technologies, like the ability to land big spacecraft on Mars. And Mr. Musk was vague about how his company would pay for all this. SpaceX is still fairly small in size and profits, and Mr. Musk conceded that he would need to rely on “a huge public-private partnerships.”

Has NASA been preparing for a trip to Mars?

Yes, but the pace has been slow. NASA has never received a large infusion of money to pursue a trip to Mars. And while the destination has not changed, the details certainly have.
For the last couple years, NASA news releases, web pages and social media postings have been festooned with the #JourneyToMars hashtag, tying a multitude of projects to the long-term goal of sending astronauts to Mars. In 2010, the Obama administration scuttled the rockets and crew capsule that were to have been part of the canceled Constellation program in favor of developing better technologies for space travel.
Members of Congress objected, particularly those from Texas and Florida, home to big NASA facilities. The Orion crew capsule from the Constellation program was revived, and Congress instructed NASA to start work on the Space Launch System, a heavy-lift rocket similar to the one that would have been built for the moon. The first launch of the Space Launch System, without a crew, is scheduled for late 2018. The second launch, with astronauts, would be at least three years later.
The space agency is only now filling in details of what it would like to do on subsequent deep-space missions between Earth and the moon, which it calls “the proving ground.”

Operating the International Space Station costs NASA $3 billion to $4 billion a year. Ditching the station — which NASA plans to do in 2024 — would free up money to build the other big pieces for a human Mars mission. Last year, a team at NASA’s Jet Propulsion Laboratory presented a proposal on how the agency could get to Mars in the early 2030s with its existing budget, along with increases to keep pace with inflation.
It would not be enough for the astronauts to land on Mars, as a lander would be too expensive.
This year, engineers at Lockheed Martin, building upon the pieces that NASA is developing, offered a proposal to send a spacecraft into orbit around Mars by 2028. NASA officials are not yet convinced. At the International Astronautical Congress meeting, William H. Gerstenmaier, NASA’s associate administrator for human exploration and operations, said he expected NASA astronauts in orbit around Mars in the 2030s.
But a landing will not occur until the 2040s, he said.
Posted by samsalleh
Labels: Journey To Mars, NASA, Space NEWS