8 OF THE COLDEST PLACES IN THE WORLD TO LIVE 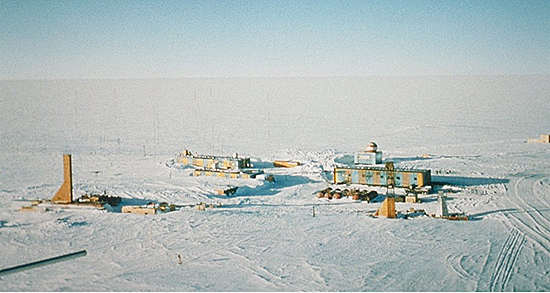 8 of the coldest places in the world to live
By Shea Gunther, Mother Nature Network, 24 October 2016.
The weather is changing again - a good time to look at some of the insanely cold places where people actually live. The citizens of places like Verkhoyansk and Yakutsk (both in Russia) live very different lives from you or me, at least in the winter. Drivers in those cities often leave their cars idling outside in the parking lot for hours while they shop and run errands, and they're familiar with the intricacies of reheating frozen axle grease with a blow torch.
The coldest temperature ever recorded was minus 128.6 degrees Fahrenheit at the Russian research station in Vostok, Antarctica [top image], on July 21, 1983. While none of these towns or cities gets that cold, some get frighteningly close to it. Here are eight of the coldest places in the world to live.
1. Verkhoyansk, Russia 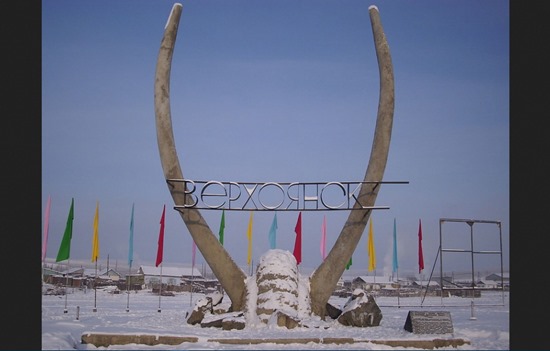 Photo: Becker0804/Wikimedia Commons
According to the 2002 census, Verkhoyansk in Russia has 1,434 hardy residents who carve out a living in the deep Siberian wilderness. It was founded as a fort in 1638 and serves as a regional hub in cattle breeding and tin and gold mining. Located 404 miles from Yakutsk, another cold locale on our list and and 1,500 miles south of the North Pole, Verkhoyansk was used to house political exiles between the 1860s and early 20th century.
It was no wonder they chose to send exiles to Verkhoyansk: In January the average temperature is minus 56 degrees Fahrenheit and mean monthly temperatures stay below freezing from October through April. In 1892, residents recorded the still all-time low of minus 90 degrees Fahrenheit. Modern-day residents pile on huge fur hats and coats and tend to stay indoors when it gets really cold.
2. Oymyakon, Russia 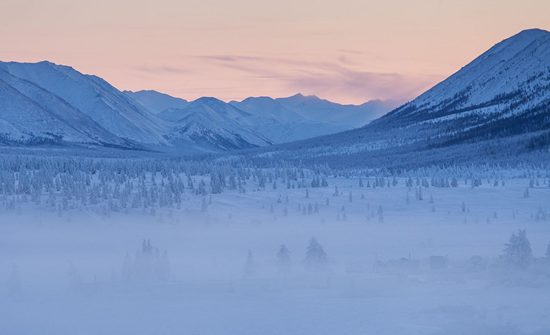 Photo: Maarten Takens/Flickr
Folks in Oymyakon take exception whenever Verkhoyansk lays claim to being the coldest location in the Northern Hemisphere, pointing out that they recorded a low of minus 90 degrees Fahrenheiht on Feb. 6, 1933. Depending on whom you ask, 500 to 800 people call Oymyakon home, a three-day drive from Yakutsk. Schools stay open through minus 52 degrees.
The village is named after a local hot spring, which some residents tap during the winter by breaking through the thick crust of ice rimming the warm water. Oymyakon's tourism board has promoted the town as a perfect destination for adventure travelers hungry for a taste of the extreme.
3. International Falls, Minnesota, USA 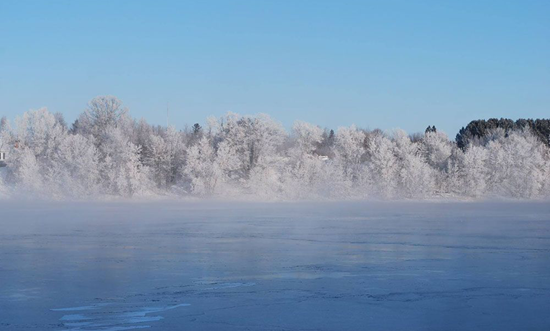 Photo: Rainy Lake/Facebook
OK, so maybe International Falls, Minnesota, isn't half as cold as Oymyakon or Verkhoyansk, but what it lacks in sheer chill it makes up for by being one of the coldest places in the contiguous United States. About 6,703 people live in International Falls (according to the 2000 census), which sits on the border between the U.S. and Canada.
Winters in International Falls are long and cold with average temperatures in January hovering around 2.8 degrees Fahrenheit as the low. The mercury hits zero on more than 60 nights a year, and the area gets a lot of snow (65.5 inches of annual snowfall). International Falls is waging a war with the next entry, Fraser, Colorado, for the trademarked title of "Icebox of the Nation."
4. Fraser, Colorado, USA 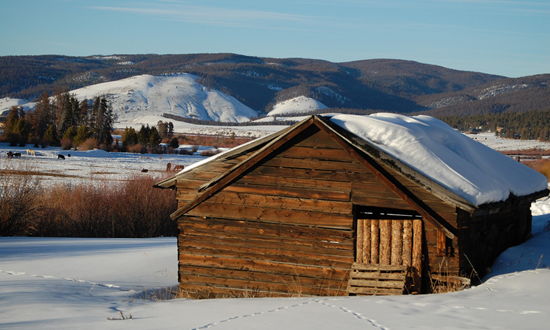 Photo: Steve Carlton/Flickr
Fraser, Colorado, sits at 8,574 feet in Colorado's Rocky Mountains and is home to 910 residents (according to the 2000 census). Located near the popular ski area of Winter Park, Fraser enjoys one of the coldest winters in the contiguous United States. The annual mean temperature for the year is only 32.5 degrees Fahrenheit, and in the summer the average low dips to 29 degrees in June.
Fraser and International Falls have been engaged in a dispute over the trademarked title "Icebox of the Nation." While International Falls has a colder winter, the year-round average in Fraser is lower. The two towns came to an agreement in 1986, when International Falls paid Fraser US$2,000 to relinquish its official claim. But 10 years later, International Falls failed to renew its federal trademark on the term. This kicked off a legal tussle that ended with a ruling by the U.S. Patent and Trademark Office in favor of International Falls.
5. Yakutsk, Russia 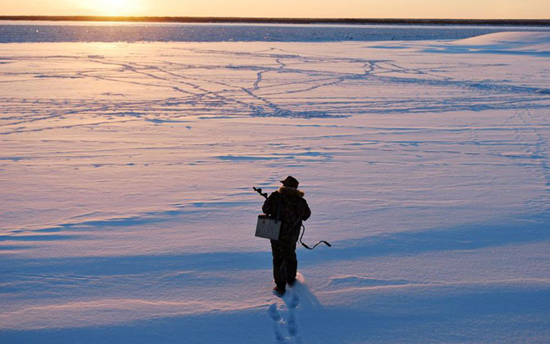 Photo: Bolot Bochkarev/VisitYakutia.com/Facebook
Yakutsk is well-known to fans of the board game Risk as that funny country between Siberia and Kamchatka. It's also known as the coldest city in the world. The world's coldest temperature outside of Antarctica was recorded not far from Yakutsk in the basin of the Yana River. During the winter, average lows drop below freezing in September and don't climb back out until May. In January, the average high is minus 34 degrees Fahrenheit; the record low for the month is a bone-blasting minus 81.4 degrees.
Many of its more than 200,000 residents carve out a living in the region's mining industry, and the city is home to numerous theaters, museums and even a zoo. In 2008, the area hit the news when a series of pipes burst in two nearby villages, forcing residents to huddle together for warmth around makeshift wood stoves. When truckers in this region make resupply runs to nearby villages, they don't turn off their engines for the duration of the two-week trip.
6. Hell, Norway 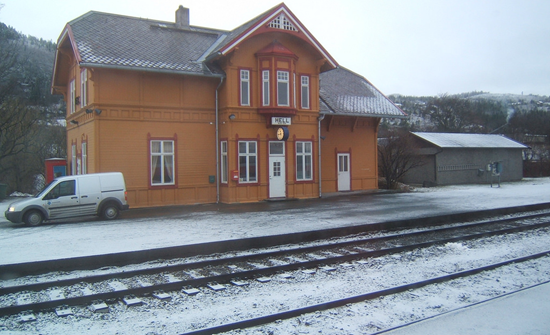 Photo: Tom/Flickr
Cue "Hell freezing over" joke here. Hell, Norway, has gained notoriety for the combination of its name and sub-arctic temperatures. The average temperature in January 2016 was a balmy 25 degrees Fahrenheit. Tourists have trekked to Hell in recent years, many to photograph themselves in front of one of the town’s train station signs.
Hell freezes over, on average, a third of the year, running from December through March.
7. Barrow, Alaska 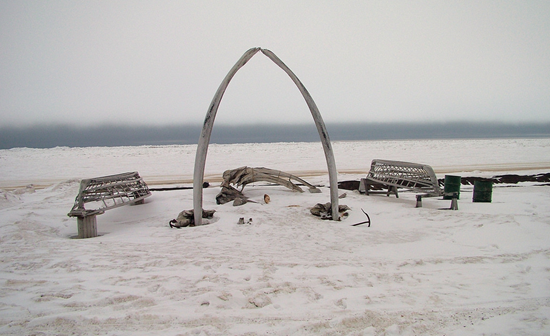 Photo: Zanzabar Photography/Flickr
Barrow is the northernmost city in the United States and is just 1,300 miles south of the North Pole and 320 miles north of the Arctic Circle. The small city of 4,581 is built on permafrost that is up to 1,300 feet deep in places and experiences super cold and windy winters. The sun sets at the end of November and doesn't reappear until the end of January. Even during the summer things stay cool. The mean temperature doesn't break out of freezing until June and even then only barely does - the average mean for July is only 37 degrees Fahrenheit.
Barrow is the economic hub of the North Slope and many of its residents work in the energy industry. The city is reachable only by aircraft or by sea.
8. Snag, Canada 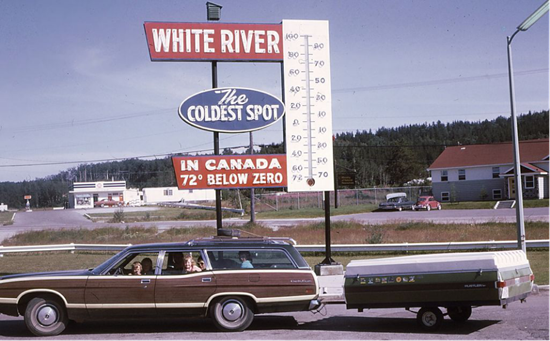 Photo: RichardBH/Wikimedia Commons
Located in the Yukon Territory, the village of Snag was first settled during the Klondike Gold Rush. Located in the valley of the White River, Snag had a bitter temperature of minus 81 degrees Fahrenheit recorded on Feb. 3, 1947. That's the lowest recorded temperature in continental North America. The average temperatures in Snag are highs of 32 Fahrenheit and lows of 10 Fahrenheit. Winter is definitely the only season around these parts.
Top image: Russian research station in Vostok, Antarctica. Credit: Todd Sowers/Wikimedia Commons.
[Source: Mother Nature Network. Edited. Top image added.]