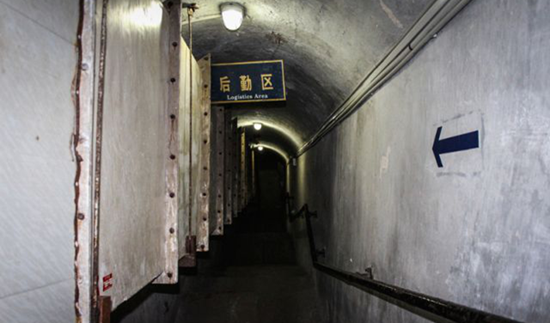 10 Creepy Subterranean Worlds Hidden Beneath Our Feet
By Morris M, Urban Ghosts Media, 4 November 2015.
There’s something eerily fascinating about the world beneath our feet. The darkness, the claustrophobia, the sense of venturing into the unknown…not to mention the creepiness. The idea that, away from the world of sunlight and common sense, the rules no longer apply. Below are ten creepy subterranean universes, some of them as haunting as any nightmare.
1. Spain’s Mysterious Catacombs 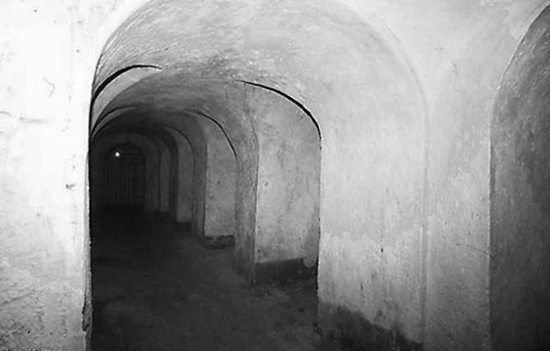 Image: via Atlas Obscura
In 1952, a restaurant owner in Titulcia near Madrid made a strange discovery. Buried just behind his eatery was a small, seemingly-ancient cave system covered in mysterious symbols. The walls were man-made, the archways hidden beneath layers of white plaster. Strange chapels lurked down dust-filled corridors. The walls were covered with what appeared to be ancient art. To this day, no-one knows who built this mysterious underground world. 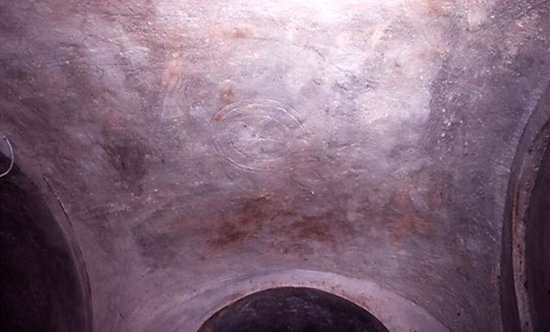 Image: via cuevadelaluna.es
According to those connected with the ‘Cave of the Moon,’ anyone from the Romans to the Knights Templar could have been responsible. Others have dated them to the Renaissance, thanks to their archway styles. Others still think they’re a place of dark psychic energy, and have reported feelings of “terror” when walking inside. The only thing for certain is that they’re a mystery.
However, we should urge caution. For a long time, the caves were administered by the same restaurant owner who discovered them, possibly suggesting a modern, monetary motive for the strange carvings. The same, however, can’t be said for our next entry…
2. Liverpool’s Mysterious Tunnels 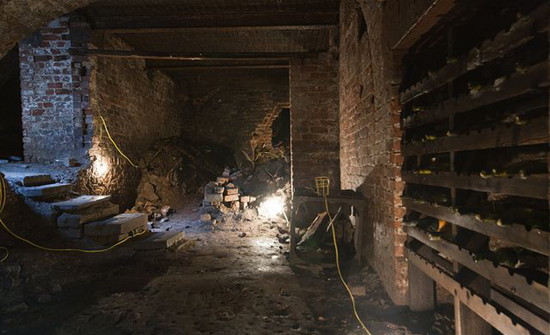 Image: Maltonian
Imagine a network of forgotten tunnels spreading out, web-like, beneath a major city. Imagine the local authorities have never heard of them, that they officially remain a mystery, even though old timers like to whisper legends about them. Imagine now that even the old timers don’t know what’s down there, lurking in the dark… 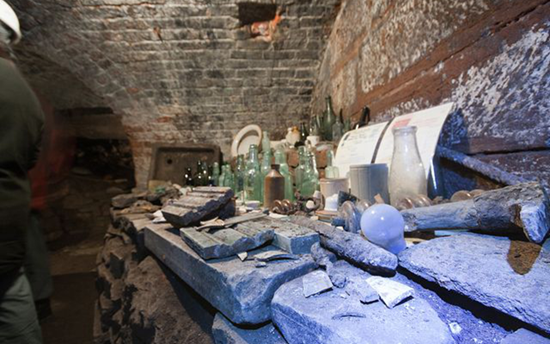 Image: Maltonian
Sounds like a plot from a hoary old horror film, doesn’t it? Only it’s not. These tunnels really exist, and they’re hidden beneath Liverpool. 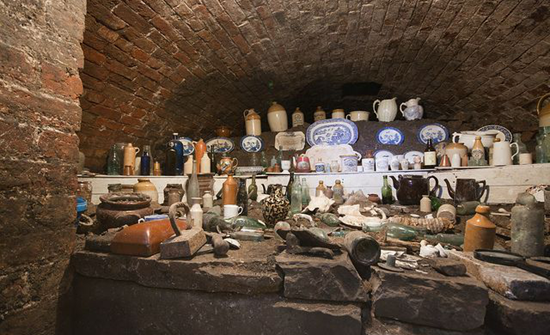 Image: Maltonian
In the 19th century, tobacco merchant Joseph Williamson ordered the construction of miles of tunnels beneath his home city. At some point, they were forgotten about. It wasn’t until 2001 that locals rediscovered them digging through a cellar floor. Since then, many tons of waste have been removed from the tunnels, opening fragments of them up. But we still have no idea why they were built. 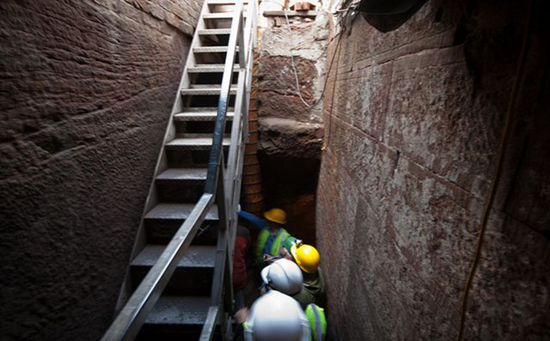 Image: Maltonian
The legends say the tunnels go on for miles and miles, unwinding all across the city. From what has been excavated so far, they do indeed seem endless. Many chambers are over 15ft high, and branches radiate out in all directions. Some think they were used for smuggling. Others, so Williamson could move between buildings undetected. Yet others think he was part of a doomsday cult preparing for the end times. The truth will probably never be known.
3. China’s Terrifying Spider Tunnels 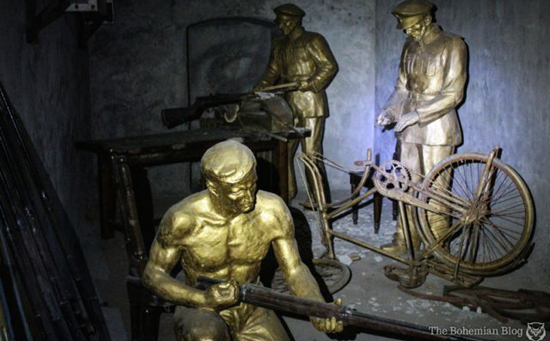 Image: Darmon Richter/The Bohemian Blog
Qingdao in China is an unusual place in many respects. Colonized by the Germans in the 19th century, it still retains traces of European architecture and culture. The colonizers most-enduring legacy, however, could be their tunnels.

Image: Darmon Richter/The Bohemian Blog
Fearful of an attack by the British, the Germans dug a huge network of tunnels beneath the city (then known as Tsingtao). Although some are now open to tourists, many more have caved in, or flooded, or are otherwise inaccessible. Creepiest of all, though, are the tunnels on the lowest levels. Deep beneath the surface of the Earth, they’ve been completely abandoned by humans. Instead, a vast, oversized colony of Huntsman spiders have moved in, chasing out all other living things. 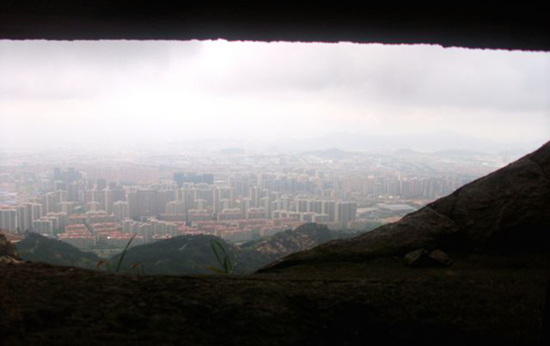 Image: Darmon Richter/The Bohemian Blog
Some of the biggest spiders in existence, the Huntsmen, are hugely aggressive, chasing down and attacking anything they deem a threat. While their bite is not poisonous to humans, it is still painful. More to the point, their sheer size is enough to set off arachnophobic alarm bells in even the bravest of people. All things considered, it is perhaps no wonder these tunnels are now abandoned.
4. Poland’s Bat-Haunted Underground Nazi Complex 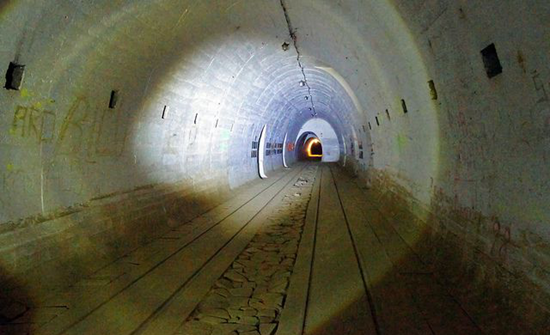 Image: Michael
The modern fate of Poland’s Ostwall Fortification is almost as fascinating as its past. A giant tunnel complex built by the Nazis in the 1930s to protect against a Soviet invasion, it’s about the size of a small city. Connecting 100 pillboxes over an area of 25 miles, it was intended to hold around 24,000 men. 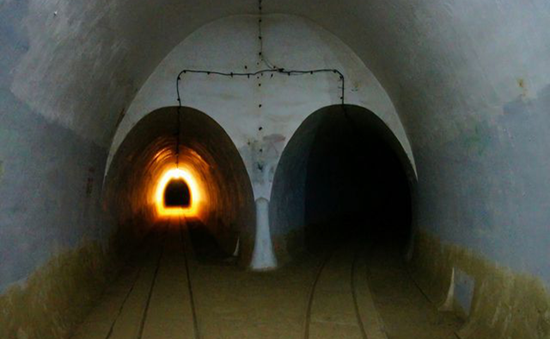 Image: Michael
In reality, only a handful were left by the time the Red Army finally rolled in, and they were quickly overwhelmed. But fast forward several decades, and something else came to call the tunnels home. Thousands upon thousands of bats. 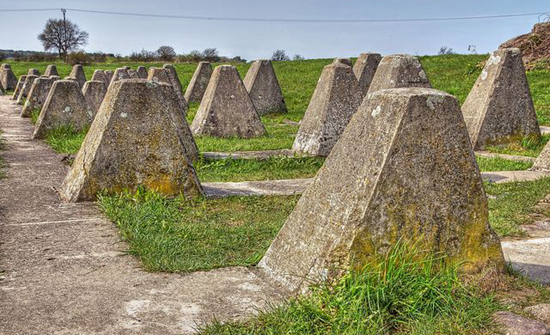 Image: Michael
Today, these deep, steel-edge tunnels hold anywhere up to 37,000 bats, making the Ostwall Fortification the largest man-made bat reserve in Europe. At night, it’s corridors echo with the fluttering of a thousand beating wings. By day, its ceilings look like something from a chiroptophobe’s worst nightmare. 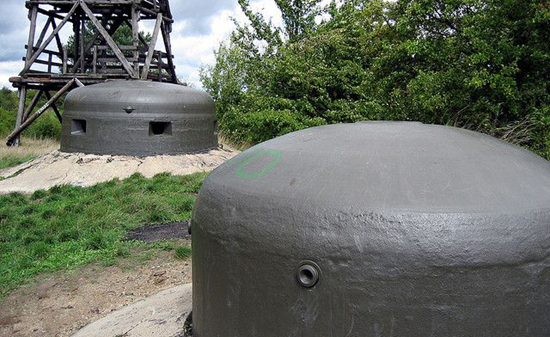 Image: Leszek Kozlowski
Parts of the complex are now open to tourists, while others are strictly off-limits. For those of us with a fear of bats, though, even thinking about tiptoeing into those shadowy tunnels is likely too much to bear.
5. Manhattan’s Little-Known Water Tunnel 3 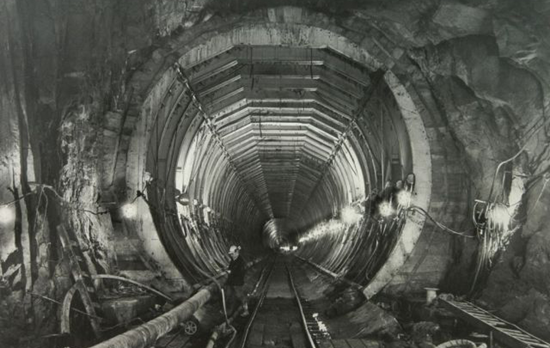 Image: NYC DEP via The Verge
Even if you live in New York, you may not have heard of Tunnel Number 3. One of the biggest construction projects in NYC history, it involves boring a 12ft diameter shaft for many miles under the streets of the city to provide residents with clean drinking water. Started in 1970, it won’t be completed until 2021.
Yet there’s more to this story than the simple triumph of technology. Since work first began, a disturbing number of deaths have occurred inside Tunnel Number 3. 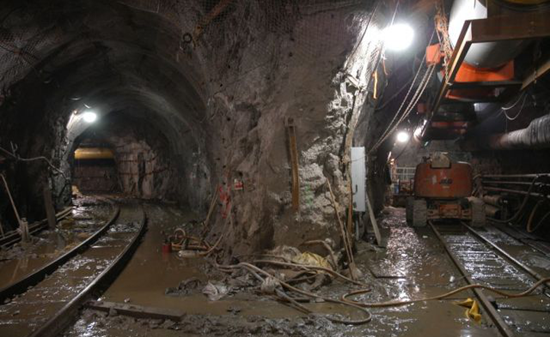 Image: NYC DEP via The Verge
To date, 24 people have died on the project - roughly equivalent to one human life for every mile dug, garnering the unfinished tunnel a spooky reputation. While there have been no fatalities for many years now, the site remains subject to rumours and whispered legends. Useful it may be, but thinking about the blood that’s gone into making Tunnel Number 3 is undoubtedly chilling.
6. Japan’s Underground Suicide Base 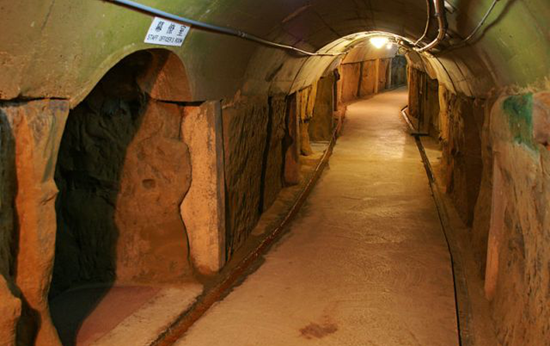 Image: 663highland
Like Europe, much of Asia still bears haunting reminders of the tragedy of WWII. Few in Japan are quite so haunting as the secret subterranean complex at Okinawa. Built by Rear Admiral Minoru Ota, it covered hundreds of metres and could hold thousands of men. When it was finally overwhelmed by US Marines on June 11 1945, it transformed from a military fortress into something much darker: a mass grave. 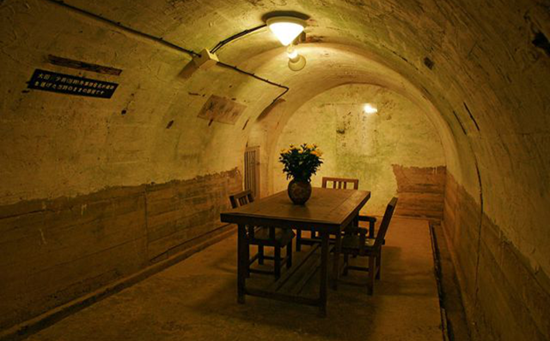 Image: 663highland
Along with 2,000 of his men, Ota committed suicide to avoid being captured. The US Marines then blew the entrances, sealing the tunnels off for several years. When the base was finally reopened in the 1950s, it was littered with corpses, still waiting to be reclaimed long after the war was over. 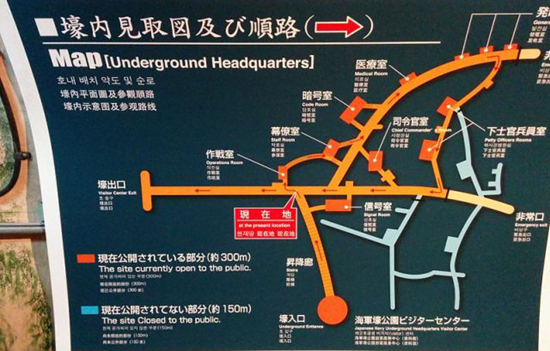 Image: x768
Today, the base still carries traces of the mass suicide that took place here. One wall is riddled with blast scars from where someone killed themselves with a grenade. Elsewhere, traces of Ota’s final scrawled message still remain. Walking through its corridors, it’s impossible not to feel a chill at the thought of all those who ended their lives here.
7. Tajikistan’s Terrifying Tunnel 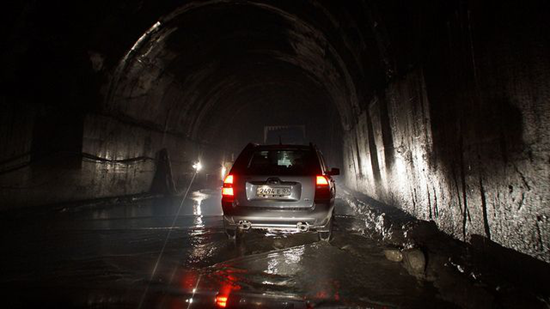 Image: Julian-G. Albert
Unlike most on this list, Tajikistan’s Anzob Tunnel is neither secret nor obscure. The main artery connecting the north to the south of the country in the bleak depths of winter, it stretches over 5km beneath a range of mountains. Unlike some of the other entries, though, the Anzob Tunnel’s creepiness isn’t based on phobias or half-forgotten atrocities. It’s based on the very real fact that those entering might not get out alive. 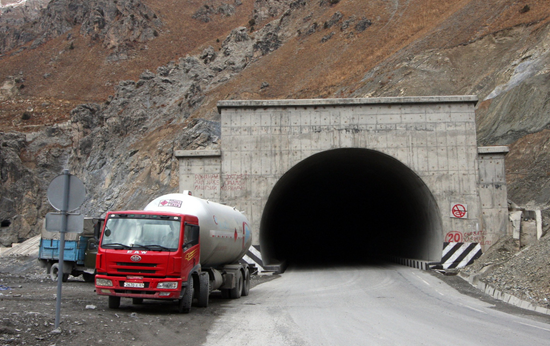 Image: Chris Price
Pitch black in the interior, the tunnel’s only light sources are the headlights of other vehicles. This would be disconcerting enough, but the tunnel is also extremely prone to deadly rock falls and floods, and is littered with potholes deep enough to sink a car in. Scariest of all, there is no ventilation. A thick layer of deadly smog permanently fills the entire 5km length, blocking visibility and poisoning anyone unfortunate enough to break down. Death from suffocation is a frequent, frightening reality. 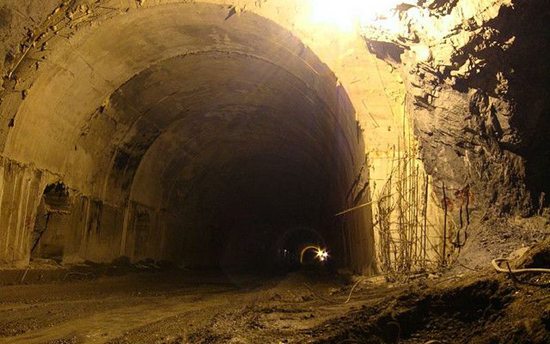 Image: Robert Thomson
The locals call Anzob “The Tunnel of Fear.” For those who venture into its dangerous, smog-choked embrace, it may just be the scariest on our entire list.
8. Znojmo’s Goblin-Infested Catacombs 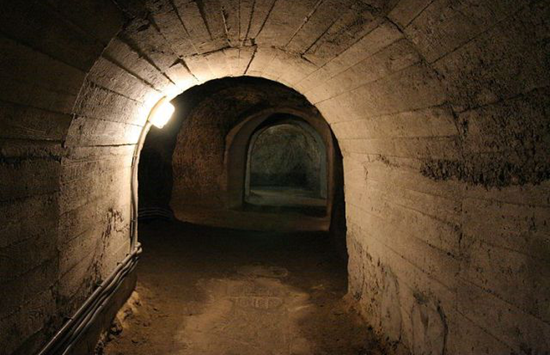 Image: Che
Located near the Austrian border, Znojmo in the Czech Republic is firmly off most tourist’s radar. Yet this pretty little town harbours a secret at odds with its sleepy image. Deep beneath the streets, a series of goblin-infested catacombs connect all the historic houses.
Originally built as a hiding place for residents in case of invasion, the catacombs are long, winding and crudely constructed. At one time, they opened into the cellars of nearly every house in the town, creating a kind of underground mirror image of the world on top. It’s said that an invading army once marched into the town to find it eerily deserted, as the entire population slipped away into the dark, subterranean world.
Today, parts of the tunnels are open to tourists, while the other parts are occasionally visited by camera-toting urbexers. However, it pays to not stray off the approved path. The Znojmo tunnels are said to be home to a host of ghouls and goblins straight out your nightmares. Try going down there by yourself after dark, and you may just find yourself believing in such legends.
9. Birmingham’s “Blackout” Tunnels Image: BT Archives
Entering Birmingham’s old “blackout tunnels” is like stepping into another world. Stretching underneath Britain’s second largest city for many miles, they were built in 1936 and used in World War Two as a combination air-raid shelter and factory. Completely abandoned for many years now, they have one curious, slightly-spooky feature. Designed to be invisible to Luftwaffe planes, they let in absolutely no natural light at any point. Stepping into them is therefore like stepping into the most-perfect darkness you’ve ever known. 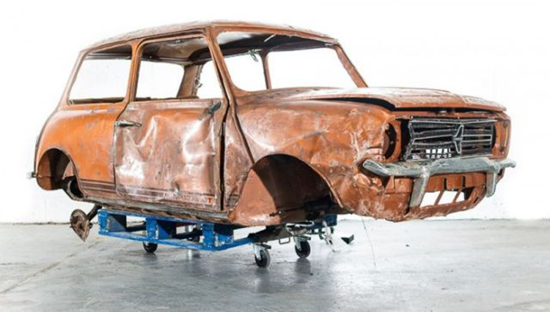 Image: Silverstone Auctions
Now flooded and rusted, these pitch dark caves have a mysterious recent history. A few years ago, a Mini Clubman car was found abandoned deep inside the tunnels, smashed almost completely beyond repair. Strangely, though, it only had a mere 11 miles on the clock. Whoever had left it there didn’t want it discovered. Why they chose to leave it in this dark world is something we’ll likely never know.
10. Turkey’s Entrance to Hell 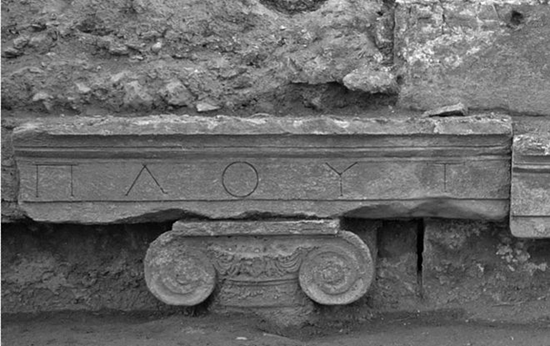 Image: Francesco D’Andria via Discovery News
What could be creepier than discovering a literal entrance to Hell? You may have heard about Turkmenistan’s terrifying gateway to damnation - in reality an exploratory gas hole that was set alight by the Soviets in 1971 and continues to burn to this day. Turkey goes one better. In 2013, archaeologists discovered an ancient doorway the Greeks believed literally led to Hell. 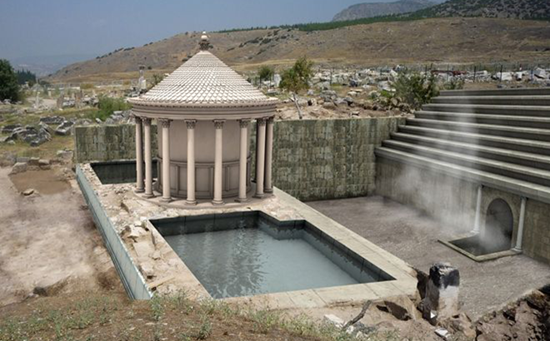 Image: Francesco D’Andria via Discovery News
Known as Pluto’s Gate, the site was built over a cavern that emitted extremely toxic fumes. In the 6th century BCE, priests would stand at the entrance, casting in animals and pulling their carcasses out after they suffocated. Ancient writers describe it as like looking into a tunnel filled with thick fog, in which any animal cast would meet an instantaneous, and horrific, death. 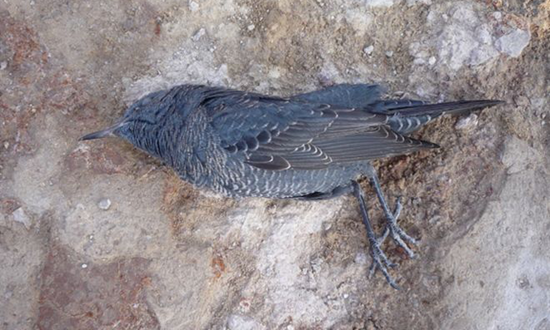 Image: Francesco D’Andria via Discovery News
Today, the site is mainly rubble. Yet the hidden entrance continues to emit noxious fumes that kill any birds who wander too close. If you’re ever in the region and decide to go exploring, try not to get too close to any mysterious doorways. Just in case.
Related – The Vast Salt Mines of Subterranean Detroit
Top image: China’s Qingdao tunnels. Credit: Darmon Richter/The Bohemian Blog.
[Source: Urban Ghosts Media. Edited.]